Italians refer to Dante Alighieri as
the "father" of the Italian language. 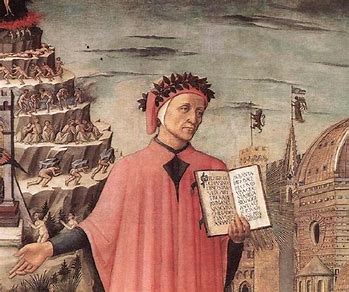 The impact of his writings, in a divided and troubled Italy, was such that the dialect of Florence gained the admiration of virtually all. Many critics consider his masterpiece, La Divina Commedia (The Divine Comedy), the most eloquent summary of moral, religious and political thought of the Middle Ages.

Dante was born in Florence in 1265 of middle-class parents. At age nine, he met and fell in love with Beatrice Portinari, the woman he ultimately idealized as Divine Revelation.

Dante became a pupil of the philosopher Brunetto Latini and studied in Bologna. At the time, Florence was torn by disputes between the Guelphs, who traditionally supported papal power, and the Ghibellines, a faction favoring imperial rule. Rejecting those extremes, Dante joined the moderate Bianchi (Whites), branch of the Guelphs, which advocated a Florence independent of both pope and emperor.

Meanwhile, Beatrice married another man and died at the age of twenty-four. Dante was grief-stricken. A few years later he commemorated her in La Vita Nuova (New Life), a group of poems with prose commentary. Shortly afterward, he married Gemma Donati, who bore him three children.

In 1300, Dante was made a chief magistrate of Florence. Soon, while he was away on a diplomatic mission, the rival branch of Guelphs seized power and condemned him to death. After years of wandering, he settled in Ravenna, where he died in 1321.

Dante began writing The Divine Comedy about 1302 and completed it in Ravenna shortly before his death. He called his epic poem Comedy, which at the time merely meant that it had a happy ending. Admirers added Divine to the title of the Venetian edition of 1555.

The Divine Comedy is an elaborate allegory describing man's progress from sin to repentance and, finally, to redemption.

At the beginning of this ten-day journey on Good Friday, 1300, the poet is lost in a dark forest of error. Beatrice, as the Divine Revelation, looks down from heaven and sends Virgil, the Latin poet, to guide Dante through Hell and Purgatory to Heaven. In this remarkable voyage of philosophy, Virgil symbolizes human reason.

Through the centuries, Dante has come close to symbolize the moral conscience of the Italians who, in times of political crisis, turn for inspiration to his life and works. He is both an ancient and a modern. Solitary, he stands like a mighty peak between the Middle Ages and the Renaissance.